President Elisabetta Gabri of Brunello S.p.A speaks proudly about the company's respect for tradition, in made-in-Brunello products and continuous creation through innovation 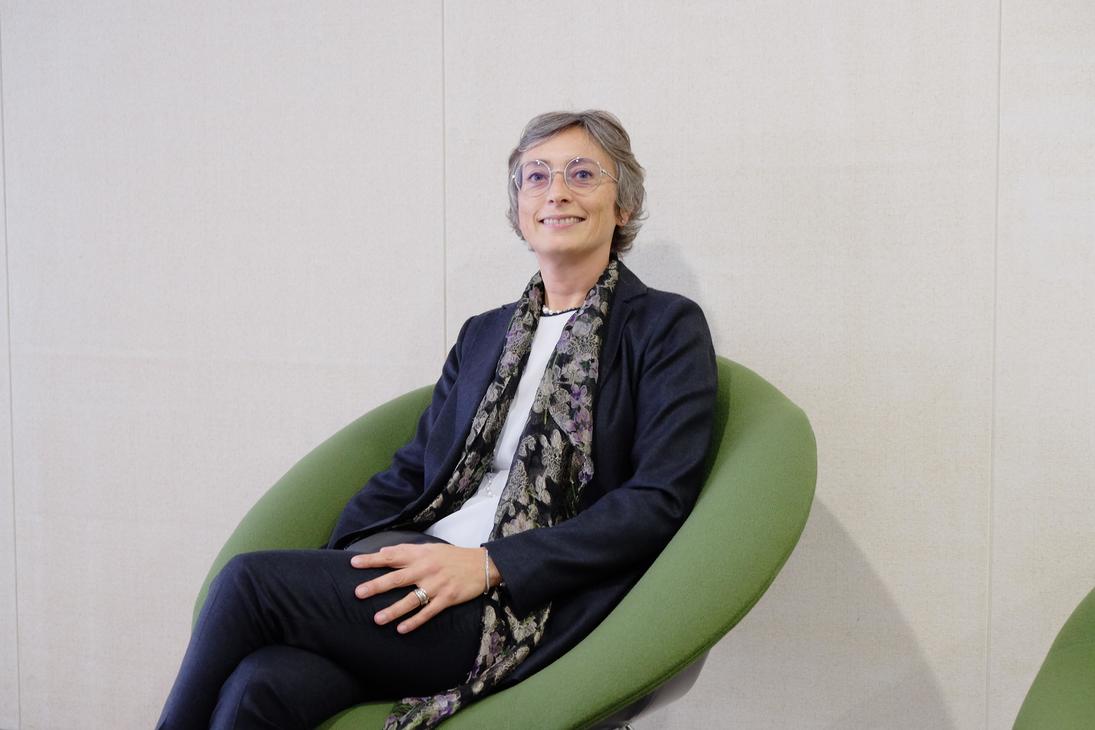 Brunello was founded in 1927, in BRUNELLO (Varese province), Italy. It is the market leader and the largest lining weaver in Europe.We asked President Elisabetta Gabri about her commitment to manufacturing and choice of materials. 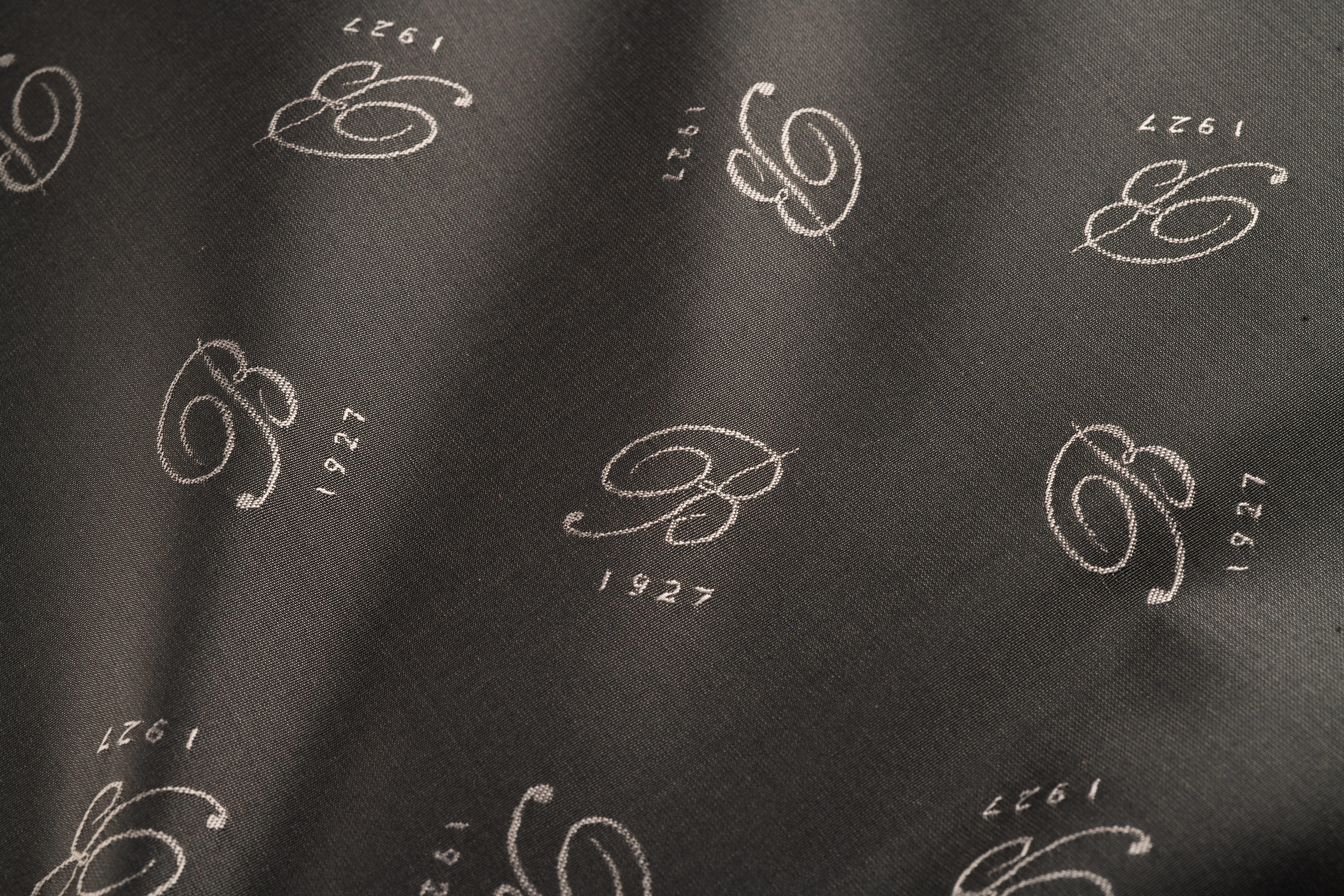 My mother inherited the company at the age of 24 and built its foundations Brunello S.p.A was founded by my grandfather Giuseppe and grandmother Maria in 1927, in BRUNELLO in Varese province, Italy. It started as a commission weaver, mainly producing cotton fabric for ladies’ clothes.
Pret-a-porter (ready-made clothes) did not exist yet. Consumers would buy fabric and have tailors make their clothes. During the World War II the government imposed the "self-sufficiency" regime and in Italy, at a certain point, cotton raw material run out. Therefore we began to use Canna Gentile, which was a sort bamboo rayon fiber made in Italy in the city of Torviscosa. This was our first step in establishing our position as an expert in regenerated fiber.
We began to produce linings around 1950. We continued to purchase viscose rayon from ENKA GmbH & Co. KG in Germany and Bemberg from Bemberg S.p.A. in Italy. Thus, we established our position as a specialist in linings made from regenerated filament.
My grandfather passed away suddenly in 1956. This forced my mother Anna Maria to take over the company. The oldest of three children, she was already working for Brunello.
It is easy to imagine how difficult it was for her, who was only 24 at the time, to be President.
However, she expanded the factory through her hard work. When my grandfather was President, the factory had 80 weaving machines and two buildings. She expanded to more than 400 weaving machines and five buildings. This is how my mother established the foundation of what Brunello is today.
My Aunt Rosanna supported my mother when she was devoting herself to her work after taking over the company at a young age. With her warm-heartedness, my aunt eased the mind of my mother, who was work-oriented and even had a machine-like mind. Thus, she gave a sense of security to the company.
The combination of these two women was essential for the company. 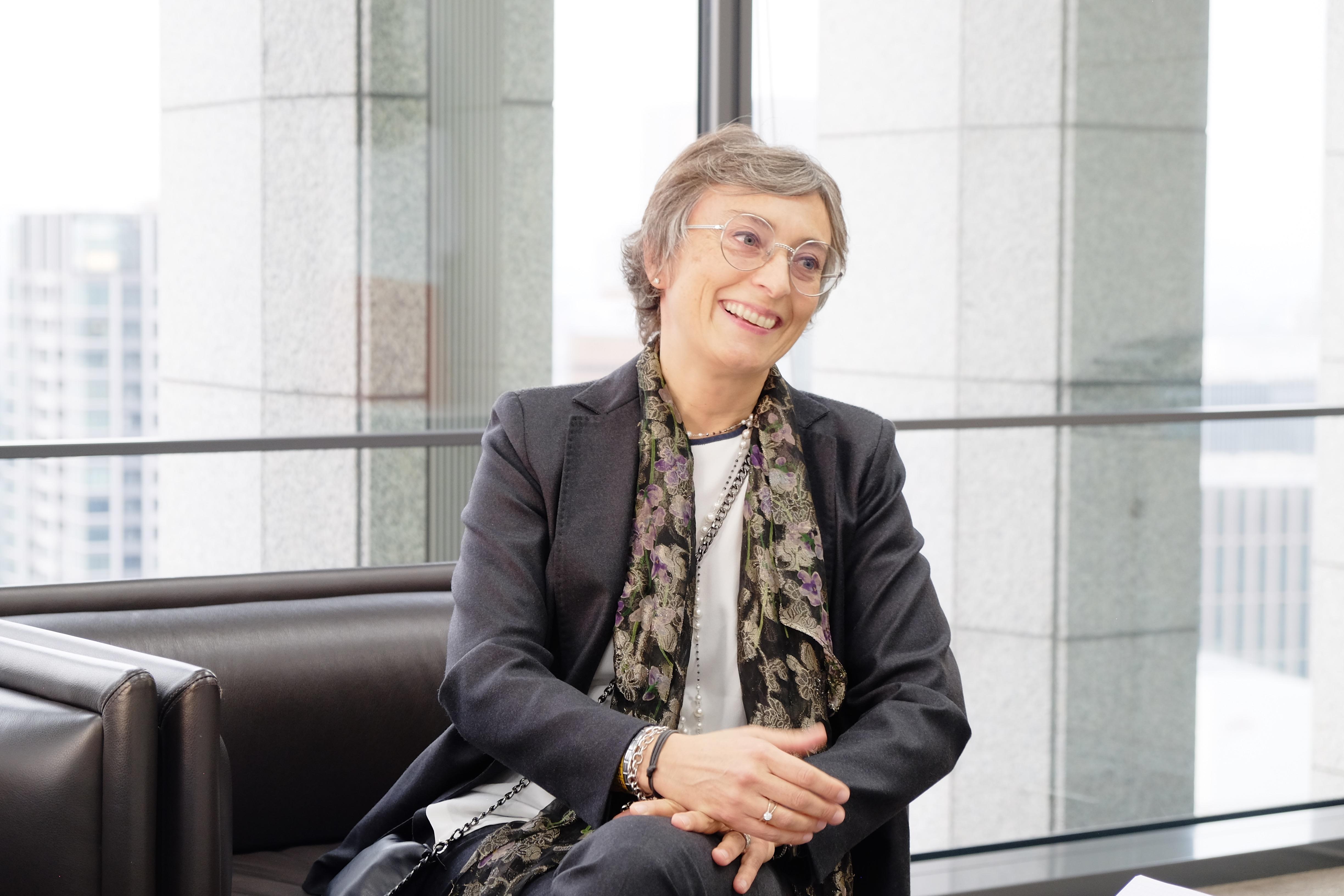 Entering the global market with continuous efforts toward innovation In the 1970s, we began to work directly with apparel companies.
A purchase manager from the Marzotto Group, which is a major, leading fabric converter in Italy, gave us a request, “We want to purchase fabrics directly.” This was the beginning of our BtoB.
We later began business with Facis, the mainstay brand of Gruppo Finanziario Tessile (GFT). This served as a great driving force in our globalization. This company created the scale of drop for men’s jackets for the first time in Italy. Thus, the company began industrial production of suits and jackets. In other words, it created pret-a-porter.
In those days, the company had factories in Boston (United States) and Northern China. We began to establish the internal systems needed to deliver fabrics to those factories, including sales and logistics networks.
This provided a foothold for our overseas expansion, which we later achieved.
People from GFT traveled around the world to teach the industrial production of suits and jackets. As a result, companies that learned the method began to place orders with us as a lining supplier.
In the 1980s, we purchased the world’s first air-jet weaving machine with a jacquard (JQD) and succeeded in commercial production with it.
This enabled the industrial production of fabrics with high design quality.
I think that a factor in my mother’s success was the continuation of these technological innovations.
She always looked toward the future, continuing quality and productivity improvement.
This is one of the most important lessons that I learned from her, along with the philosophy of providing products with the highest quality at the highest level. 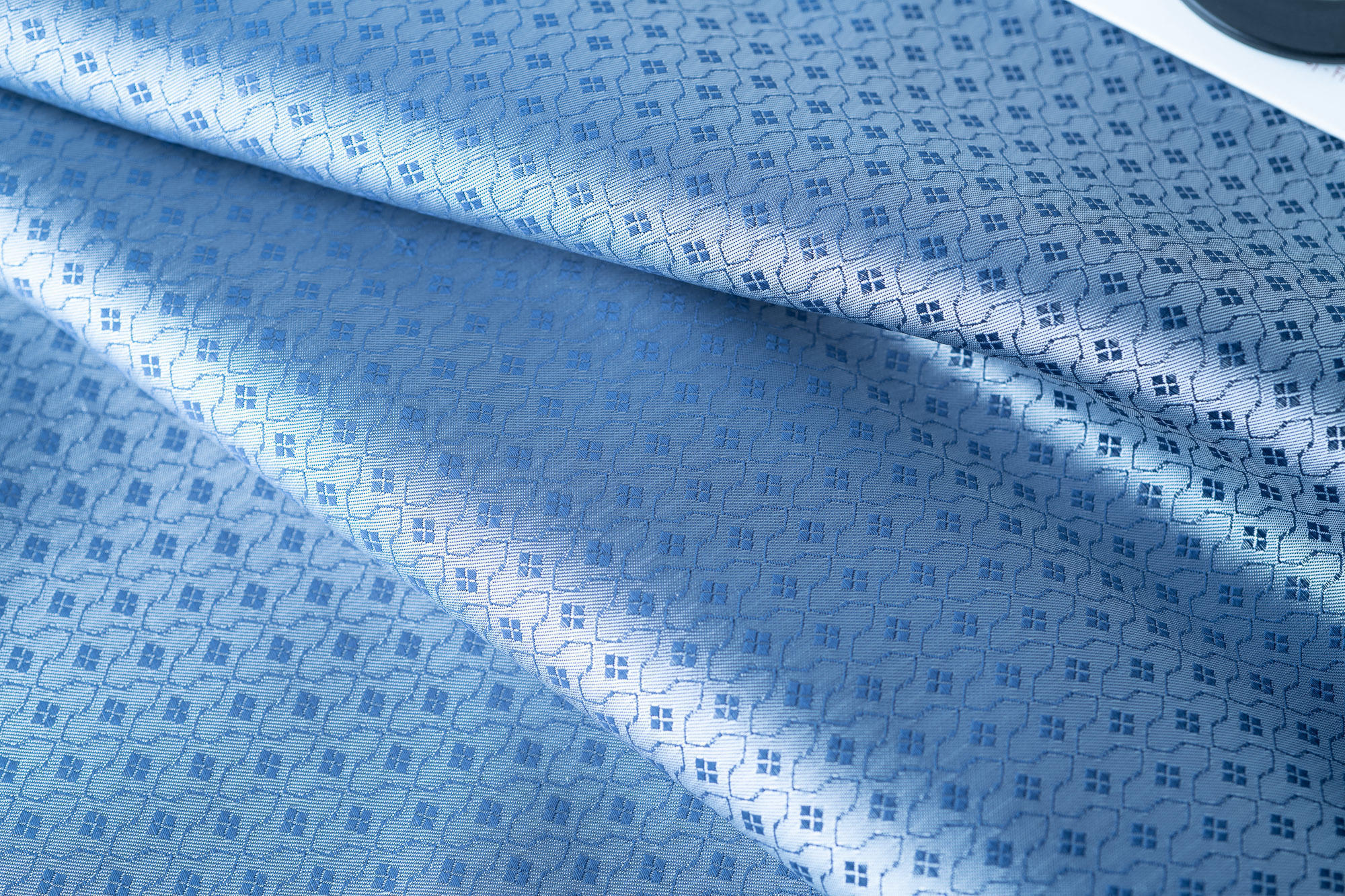 Surviving a complicated era in a team that shares thoughts In 1997, I graduated from university and joined Brunello.
I received training in all departments, from fabric production to inspections. When I was a salesperson, my first customer was Zegna, a world-class brand and one of our most important customers.
I officially became President in 2007.
Recently, the speed of changes in the world has been remarkable. Those changes are growing more complicated day by day.
The key to surviving in such an era is sharing.
We are no longer in an era when one responsible person can drive business forward. The success of an organization depends on whether you can form a team that shares the same thoughts, in which members communicate closely by sharing information and ideas.
Key words for the success of our family business at Brunello are “sharing as a team,” “enthusiasm,” and “establishment of deeply held values.”
At present, I am proactive in implementing the systematization of the production processes.
Now, we manage all weaving machines with IT, which has enabled the unified management of all processes, from productivity of weaving machines to loss rate of inspections.
This enabled us to identify problems and improve productivity.
Moving forward, we will focus our efforts on initiatives for establishing a productive, efficient production system, such as the decrease of energy consumption, the further reduction of loss rate, and the accelerated introduction of IT, while continuing facility investment.
We would like to maintain and develop our business by taking advantage of our knowledge and making the most of our strength. 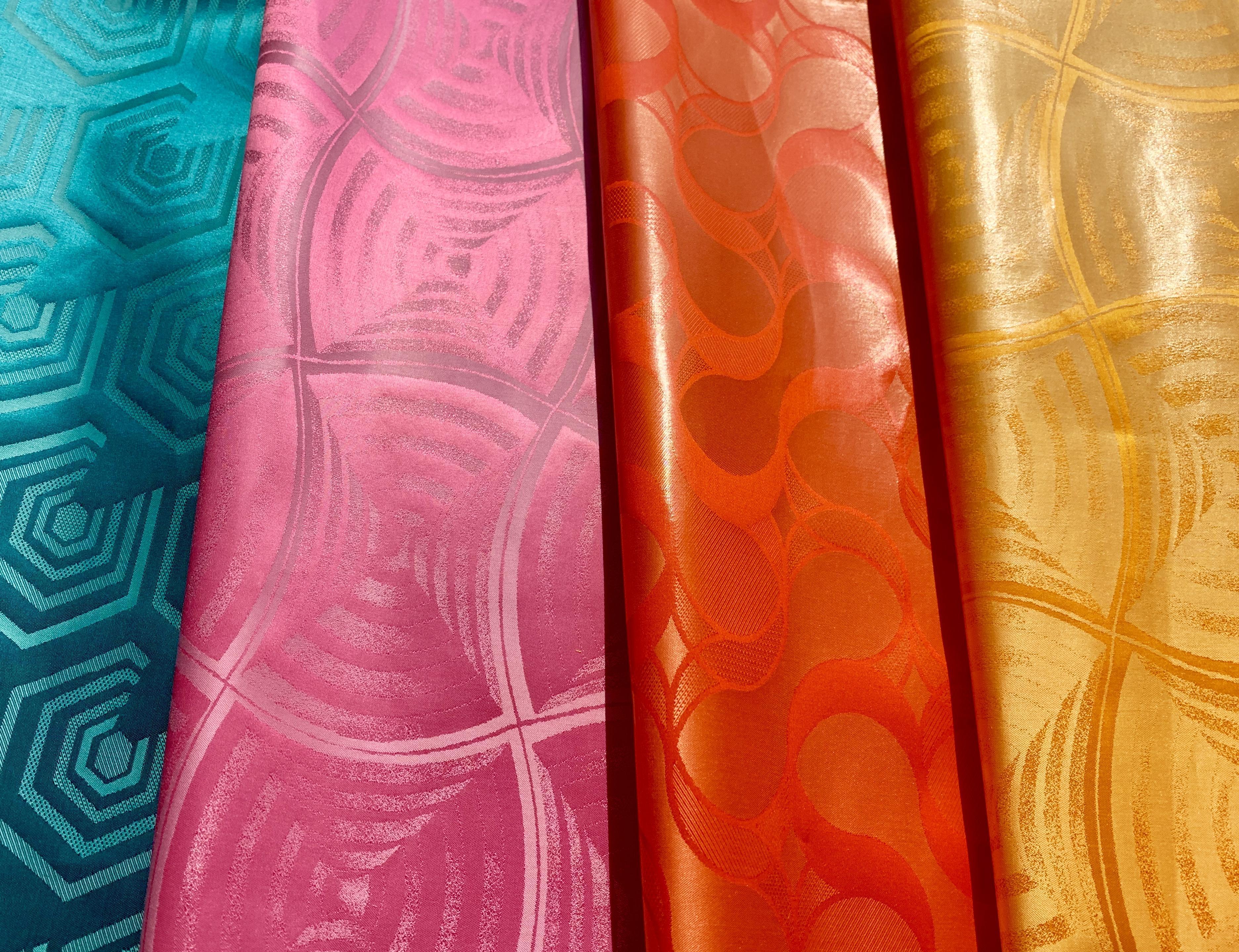 A partner who is essential for both our core business and development of a new market While positioning linings as our core business, we have always tought to enter a new market. However, this had been unsuccessful for many years.
Then we received a request for a 100% cotton JQD fabric from Africa.
We initially turned it down because we could not use natural fiber as warp yarn due to equipment limitation. However, because we were interested in this project, we tried using Bemberg as warp yarn.
We showed the trial product to the client, who highly rated its three-dimensional appearance and texture.
Based on this trial product, we worked in research and development on African traditional clothing called Bazin and acquired a patent for the fabric under the brand name BemBAZIN.
This name is reminiscent of Bemberg as our mainstay material. We will combine it with our company name. I hope this will help us establish an image of fabrics using Bemberg from Brunello as high-quality products and allow us to take advantage of this visibility when we market linings in Africa in the future.
We are planning to increase the number of dedicated weaving machines for BemBAZIN to around 50 units.
At the moment, however, we are not planning to expand it further.
Our core business is linings and we would like to steadily pass down our strengths.
The formal wear market is said to have shrunk to around one-tenth of its size in the last 20 years.
I think this is attributed not only to the emergence of fast fashion but to changes in the clothing culture and consumers’ purchase mindset.
However, I do not think jackets will completely disappear from wardrobes.
Rather, more customers will be particular about the products they purchase, seek uniqueness and could pursue high quality.
If that is the case, I believe that our development capability and quality will be supported by customers.
A reliable partner is essential in considering the future.
We are strengthening initiatives with Bemberg not only because of its history and quality but also because we believe that Asahi Kasei will continue to produce Bemberg in the next decades as its partner. 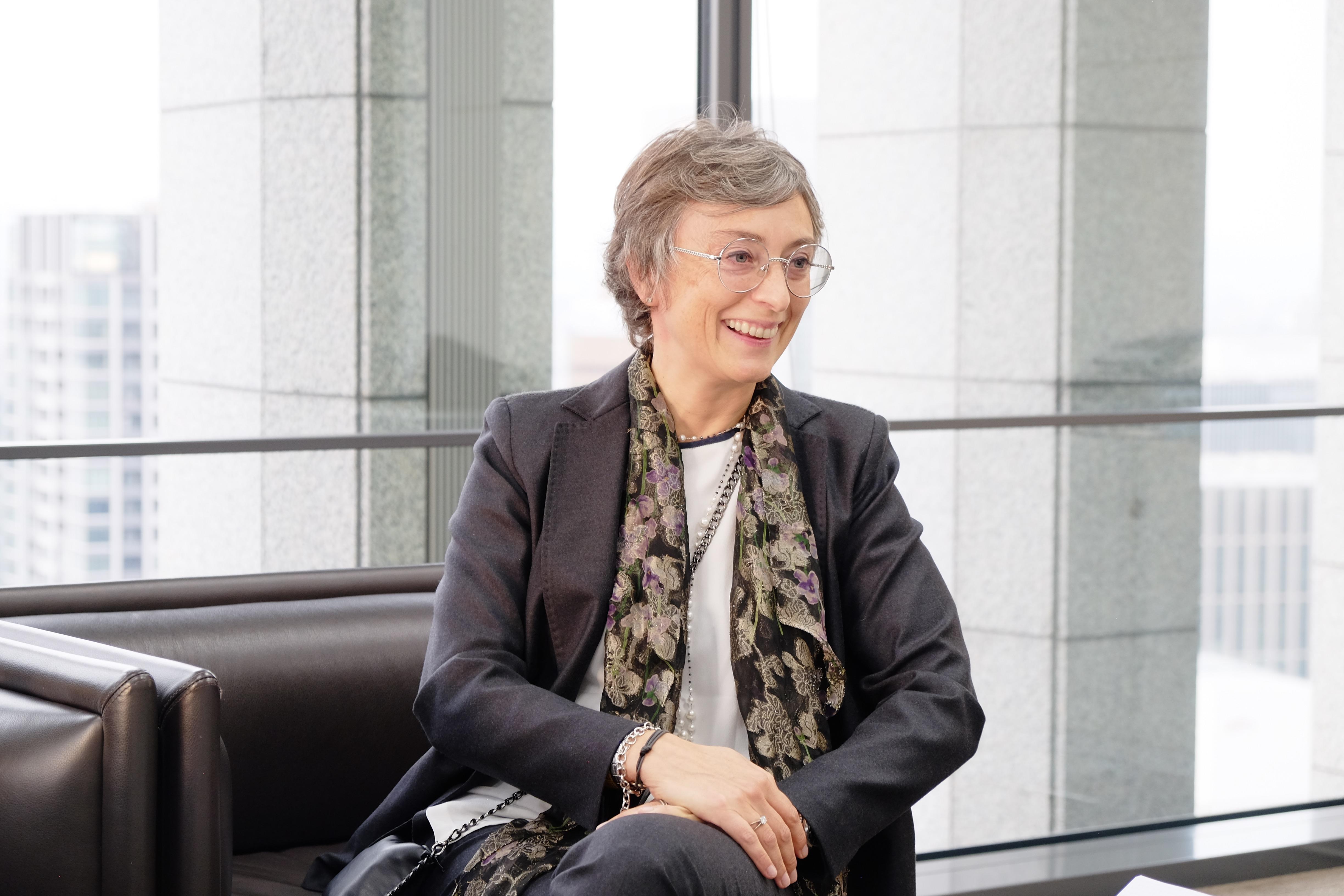 With pride and passion as a leading lining manufacturer Customer needs for sustainability have been growing day by day. Environmental certification is no longer added value, but is a normal aspect similar to quality and services.
Compared to what is happening upstream, initiatives for spreading environmental certification and having it appeal to consumers have yet to be taken downstream. Above all, apparel manufacturers have yet to have it appeal to consumers generally. I think this is a challenge for the future.
One thing other than certifications essentially has high value—Life Cycle Assessment (LCA).
We are required to check, share and disclose the environmental impact or how much of what energy is consumed for each production process.
Traceability will also be more important for end-consumers in the future.
Similar to the case of food, it is becoming more important to ensure clear traceability about what materials were produced where and how, how they were made into fabrics, and through what distribution channels they are delivered to consumers as garments.
At Brunello, we will continue to expand our business as a leading lining manufacturer, with pride and passion for manufacturing made-in-Brunello and made-in-Italy products, and go forward with our history and tradition that we have established, as well as our creativity and innovation, instead of simply manufacturing and selling products.

Gabri joined Brunello after graduating from university in 1997. She experienced in production, inspection and sales of fabric before she became CEO in 2007.
Gabri encouraged sharing in the team, establishing deeply held values and systematizing production processes. She also takes initiatives for establishing a more productive, efficient production system, including the decline of energy consumption, the reduction of loss rate and the introduction of IT.

Back to News TOP