Interview with Professor Teruko Tamura: Days of intensive research for comfortable, healthy clothing life and my thoughts about the future 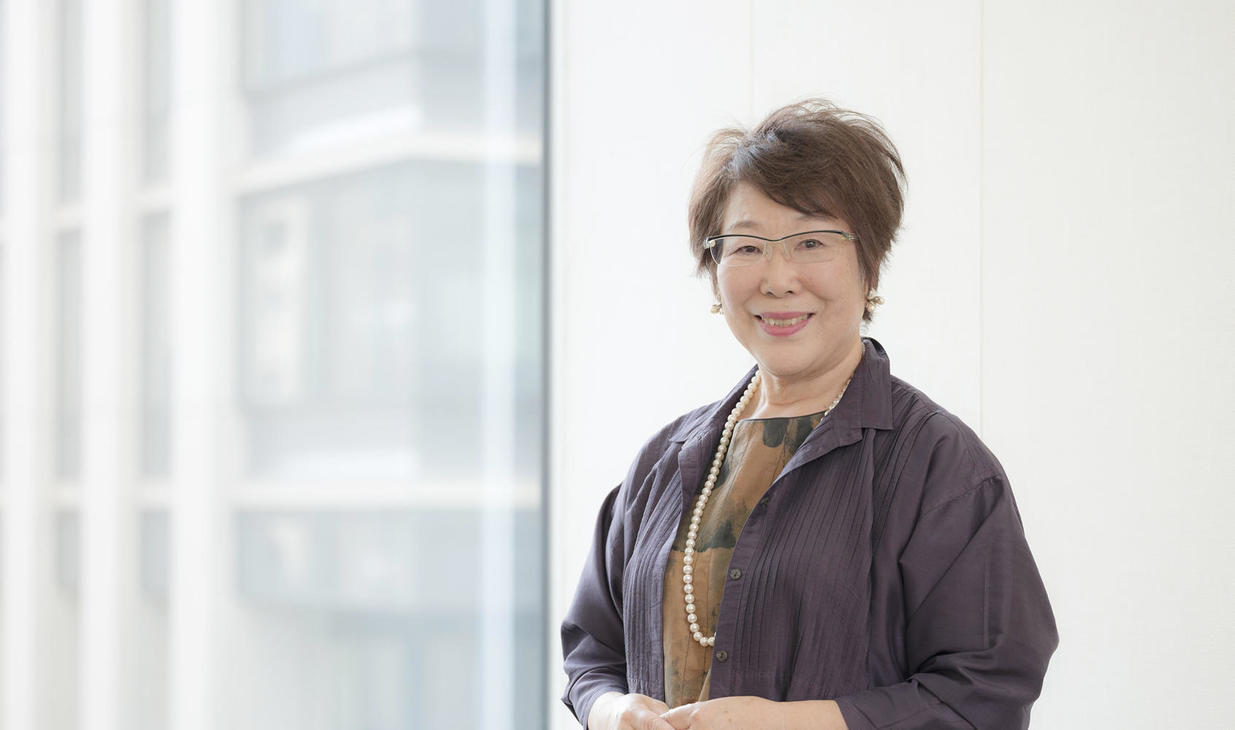 Emeritus Professor Teruko Tamura of Bunka Gakuen University is a leading researcher of clothing hygienics. She has conducted extensive research on clothing from various perspectives, including anthropometry, physiology, and anatomy. In this interview, we asked her how she has been living as a pioneer of working women and what she considers to be important for future manufacturing. 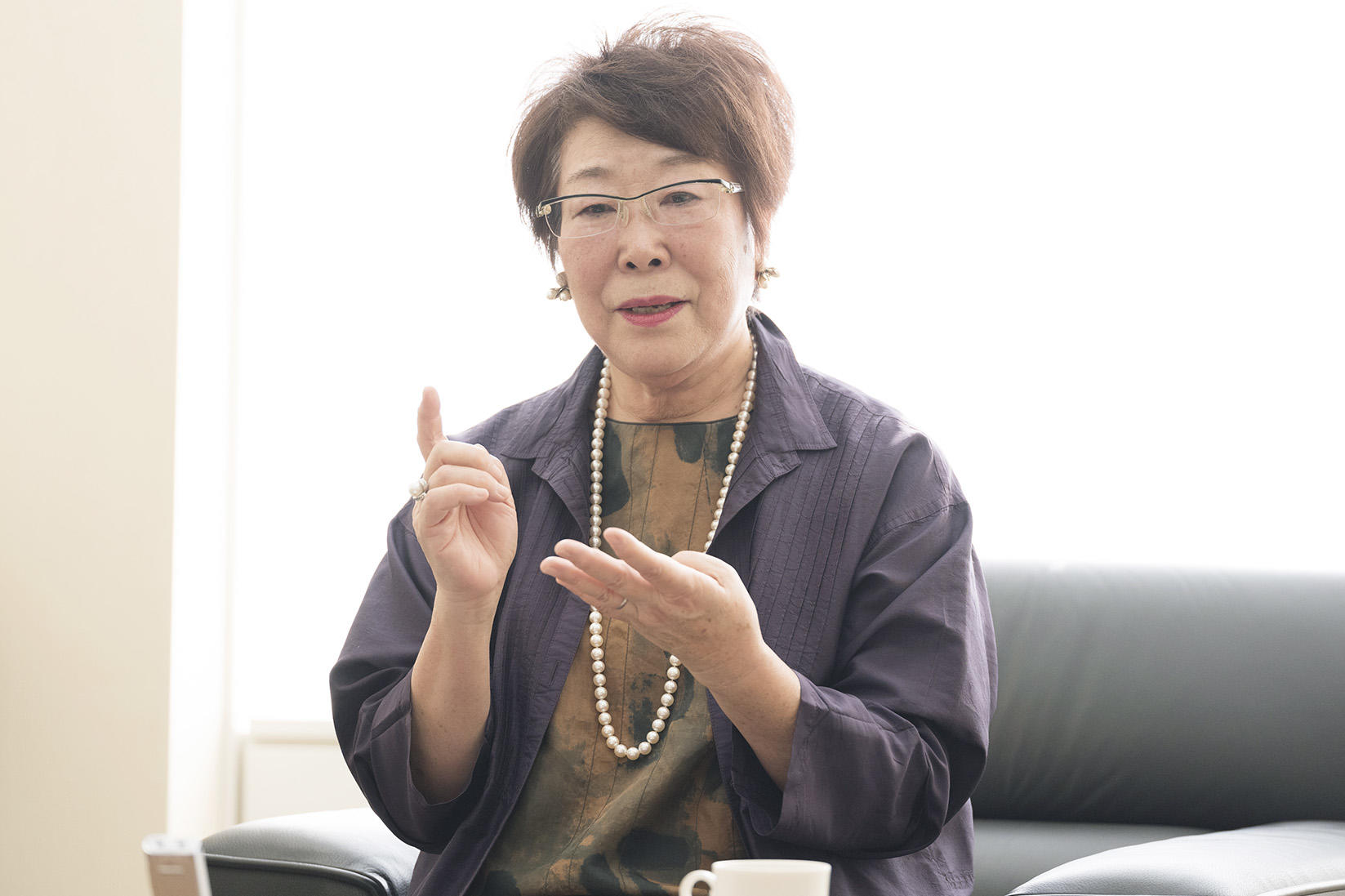 Encouraged by her supervisor to start pursuing a career as a researcher I initially aimed to be a home economics teacher, so I studied clothing construction science at the Department of Home Economics of Ochanomizu University. Influenced greatly by my supervisor at the university, however, I began to pursue a career as a researcher.
At a time when ready-made clothes did not exist, my supervisor advocated anthropometry for the first time in Japan, stating “The manufacture of clothes for many and unspecified people will be required in future,” and built the foundation for the sizes of the ready-made clothes of the present day. The supervisor led me to be aware of what is necessary for leading clothing science studies in the future, and I went on to the graduate school of the university that had just been established. In the master’s program, I studied what method is most efficient for classifying body types by applying the multivariate analysis technique for a large amount of anthropometric data. While this analysis technique can be carried out easily using a computer today, it was a high barrier in those days. However, it was around that time that I began to be interested in research. I began to be absorbed in something like the essence of academic studies, or the pursuit of answers to the questions, “How come this happens?” and “Why?”


In those days, the graduate school of Ochanomizu University only had master’s programs. However, my supervisor said to me, “Try to obtain a doctorate degree someday.” By the time I finished the master’s courses, my supervisor offered me a position as an assistant in an anatomy class at Juntendo University. I was initially bewildered and said, “Will I have to do autopsies?” (Laughter) However, my supervisor told me, “It is human beings that wear clothes. Without understanding human beings, you cannot understand what clothes should be like, can you? Anatomy is the shortest possible way to study human beings. It is a rare opportunity to go on to study anatomy after finishing courses in the Faculty of Home Economics. You should do it.” Because I am the kind of person who begins to do things without thinking (laughter), I studied anatomy intensively for two years. I was taught to do autopsies until late every night. I saw autopsies in my dreams in the early days. I struggled to learn the anatomical terms. I think that in those days, I studied the hardest I have in my life. 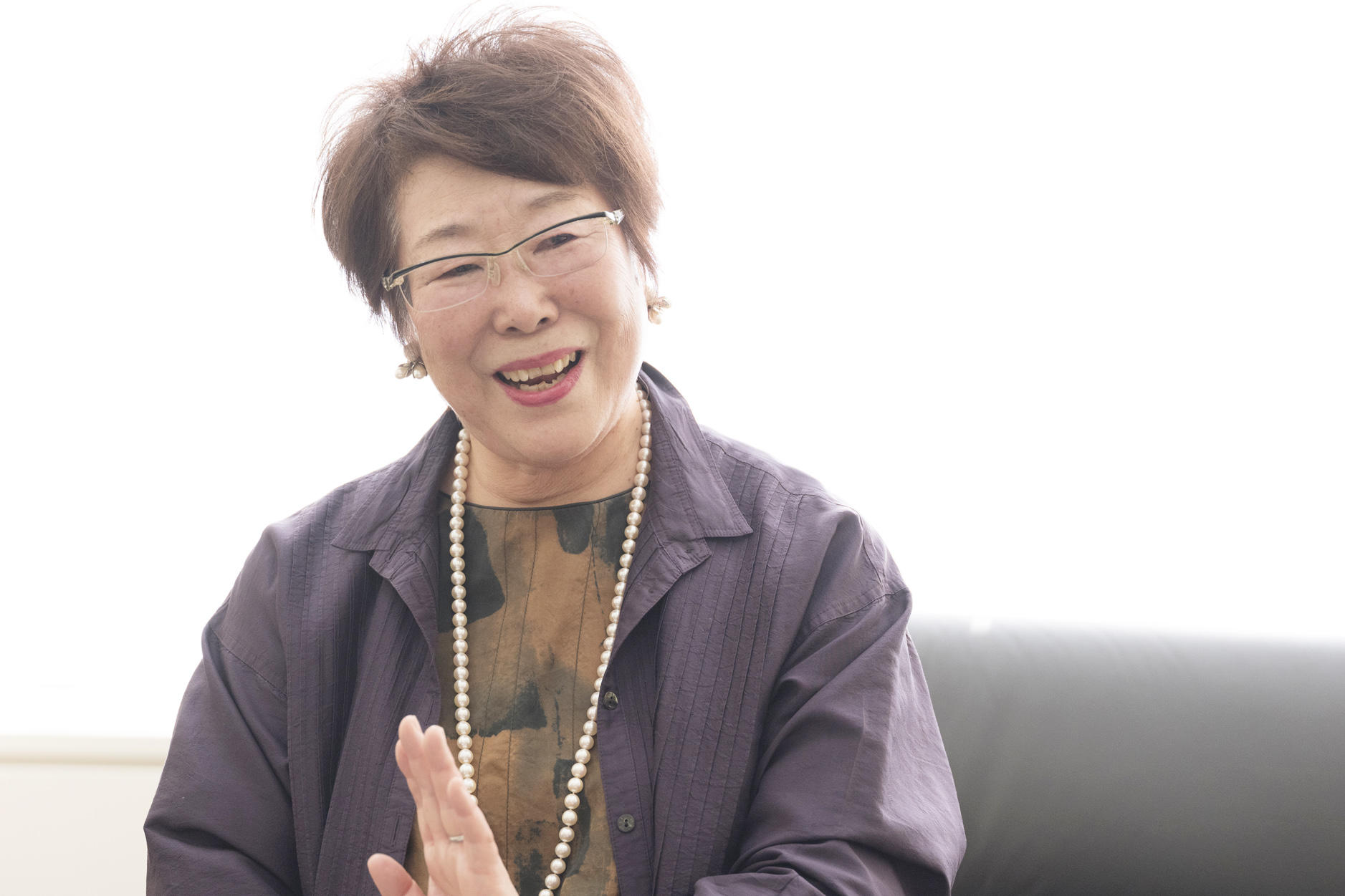 Enjoying herself fully in positions to which she is assigned Later, after I got married, I was offered a position at Bunka Women’s University (now Bunka Gakuen University) and went back to the field of clothing. After a while, I began to carry out research by using a device capable of measuring brain waves and obtaining electromyograms and electrocardiograms at Japan’s first laboratory for wearing experiments. I was accepted by an exercise physiology laboratory at the University of Tokyo as a research student, which was yet another field I had never experienced before, and I mastered physiological methods there.
I took a break to have a child. Then, while continuing my research at Bunka Gakuen, I studied physiology and hygienics as a post-graduate student of a hygienics laboratory of Tokyo Medical and Dental University. I created thermal environments in a climate chamber and studied human skin temperature using thermography, which had just been introduced from the United States in those days. Then, in the midst of childraising, I finally obtained my doctorate degree after seven years of efforts. I was over forty then. In my late forties, when childrearing became easier, the university gave me an opportunity to study at Kansas State University in the United States for six months. At this university, I worked on research in a new field again by using thermal mannequins.


What I learned from various perspectives, including anatomy, physiology, and physics, proved highly useful for the research I carried out later. Let me give you one example. With a conventional method, the creation of a prototype of clothes begins from the creation of dimensional drawings. In my case, however, I paste plates to the body and remove them. This process enables the creation of the original development diagram of the particular body. I developed this process into research on the stretch of skin and bodily movement. My knowledge of anatomy is reflected in this concept. I enjoy doing such things with my students.
In everything, I am in the habit of enjoying myself in the positions to which I am assigned. I am passive, but I work hard in all positions to which I am assigned. This allows me to accumulate knowledge, which supports me when I need a new idea in the position to which I am assigned next. As I expected, what I could do as a researcher was limited while I was raising a child. However, I enjoyed and played as much as possible and worked quite hard. Looking back on those days, I believe that this way of doing things was important.

Balance between work and family life enabled with the support of my husband and mother-in-law In those days, most women worked for two or three years after graduating from university and then got married and became housewives. I thought that I would be no exception. After I got married, I decided to continue working. The decisive factors were the fact that my husband would not be transferred due to the type of his job and that we began to live with my mother-in-law.
My mother-in-law was supportive of my working and took care of our child. Otherwise I could not have continued to work. Of course, I had fierce quarrels with her in the early days (laughter). But what I did after that was important. Believing that I should not hold a grudge after the quarrels, I looked for a way of preventing fights. I then clarified the division of roles between us, telling her, “I am responsible for this and this, while your duties are this and this.” For example, “I will take care of our child after XX o’clock, so please take care between XX o’clock and XX o’clock” and which of us is supposed to clean up. Fortunately, my mother-in-law was an understanding person, and we got along very well after dividing our roles.
My husband has also been supportive of my working. He is also a researcher, but he has something that I don’t have. It is thanks to him that I was able to enjoy my hobbies despite my busy schedule. We belonged to the same mixed chorus group when we were students, so music is our common passion. We also like eating and travelling, so we would take a family trip every year. In recent years, we have had a lot of time to spare, so we enjoy going out together for operas, concerts, and various other purposes. 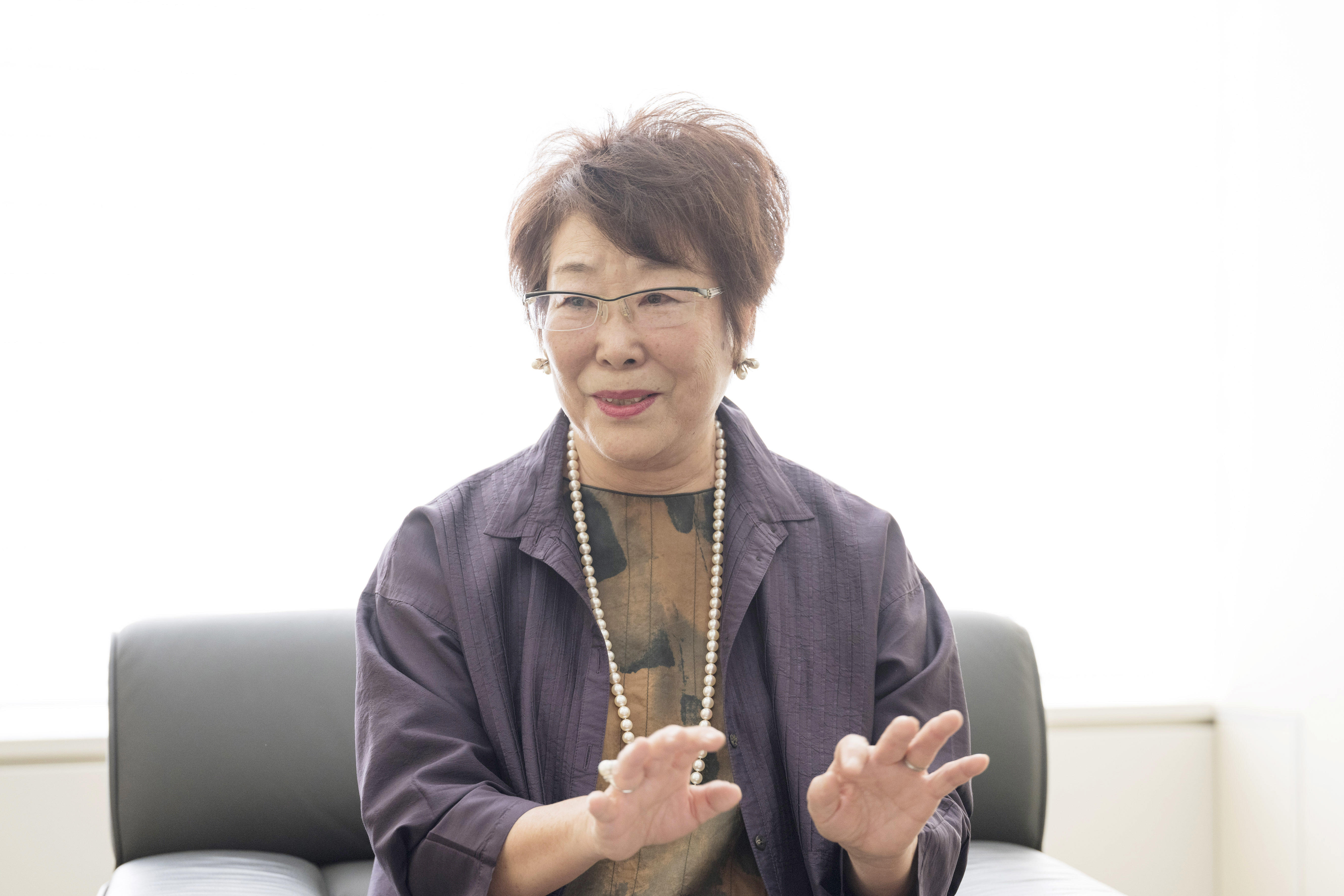 Creating a society where fashion is viewed ethically While it is of course important to manufacture clothes for a comfortable, healthy clothing life, manufacturing based on environmental consideration will hereafter be required more strongly than ever. These days, the majority of fabrics are petroleum-based synthetic fabrics. These fabrics are distributed in large quantities because they meet human desires in terms of economic efficiency and convenience. However, they are not biodegradable. The limits of petroleum itself will surely come to the surface as a problem in the future, won’t they? We can never say that such fabrics are environmentally friendly. We also see many petroleum-based synthetic fabrics that appeal to people due to their functionality; that is, fabrics that are comfortable to touch. Even wearing such fabrics, you cannot deny the uncomfortable feelings created by the water evaporated from your body and contained by the fabrics.
In this point, Bemberg is objectively excellent in terms of comfort, especially in moisture absorption. I think it is also a very good material both in terms of functionality, such as the smooth texture, low friction, and low electrostatic potential, and from the viewpoint of sustainability, such as biodegradability and the use of renewable energy.

It is said that we are borrowing the earth from our children. I hope that consumers will view fashion ethically, and that such an ethical view will be supported in the future society. I think that the provision of information by companies will be very important for creating such a society. I think that it is important for companies to continue appealing to consumers based on their own philosophy so that consumers will be able to understand how things really are and think seriously about what to choose now.

Emeritus Professor of Bunka Gakuen University and Director of Bunka Research Lab for Clothing Environment of the university. She completed the master's program at the Department of Home Economics, Graduate School of Ochanomizu University. She worked for Juntendo University as an assistant and for Bunka Gakuen University as a professor and as the dean of the Graduate School of Fashion and Living Environment Studies before accepting her current position as a Doctor of Medicine. Taking advantage of her knowledge of medical science, she has conducted research with a focus on heat, configuration and motor function and physiology of the skin, aiming to make fields related to the functionality of clothes useful for people's lives. As a result, she has become a leading researcher in clothing hygienics in Japan. She has also authored a large number of books, including Ikankyo no kagaku (Science of clothing environment) and Ifuku to Kiko (Clothes and climate) (Kisho Books).