When an oil leakage or spill occurs, it is not only rivers and oceans that are under threat. The reputation of corporations and their response to the environment, society, and governance are all called into question. There is also the risk of financial damages that could deal serious damage to any business. Our company first began developing environmental surveillance equipment in 1976. In these efforts, it was a pioneering company within Japan. For 40 years since, our long–selling environmental surveillance equipment has maintained the same basic structure, combining a simple mechanism that utilizes oil’s natural insulating properties with knowledge gained from housing design and other services, enabling us to earn No.1 market share within Japan. In 1997, we developed a non-contact laser reflection device that detects oil leakage on the micron level. In addition to addressing the need for surveillance of thin substances like oil, the device is also highly rated for preventing trouble from false alarms. 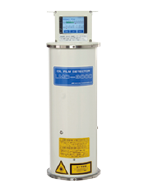 A non-contact laser light reflection oil film detector, developed to detect and prevent oil leaks and oil outflows into drainage ditches, manholes, No adjustments required for water level fluctuations of 0.3 to 4 meters from the detector, even when surface ripples, waves or water flows occur. 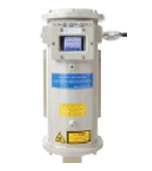 An oil leak detector developed to detect and prevent oil leaks and oil outflows at oil depots and other facilities where large amounts of petroleum and other oil substances are stored.
Detects oil layers as thin as 3 mm at minimum. Tested and approved for Intrinsic Safety.

A small oil leak detector developed for interior use in underground pits, wastewater drain pits, etc. where space is limited, such as below-ground channels and underground utility conduits.

A detector developed to detect the presence of an extraneous liquid by sensing the interface layer between two liquids of different specific gravities, such as the oil and water that sank to the bottom of the tank, and the flowed chemical solution to the drainage pit, etc.