A laser type oil film detector, developed to detect a film of oil on water surfaces in drainage ditches, pits, oil water separating tanks, purification plant water inlets, etc., and generate an alarm. Detection performance for which the conventional detector (LMD-2000) had a reputation is greatly improved as well as maintainability is enhanced Utilize the LMD-3000 for early response to oil leaks and prevention of oil outflow accidents which threaten river and marine environments. 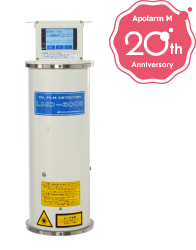 LMD-3000EX is a pressure-resistant explosion-proof oil film detector which can be used in such hazardous locations as where oils or an explosive atmosphere including petrochemical materials exists continuously.
The Laser scanning and reflected light sensing method can detect a slight amount of oil films on the water surface without any adjustment even when a water level fluctuates or ripples and waves form. 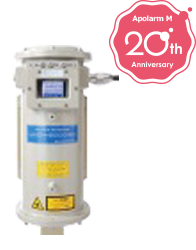 Conventional method of emitting laser beams to water surfaces and receiving reflected lights uses a spotlight as the light source. In this method, ripples and waves can cause the emitted laser beams to reflect irregularly, disabling the reflected lights to be received. Thus it is not practical in cases where the water level fluctuates largely or where ripples and waves form due to high flow. (Fig. 1)

This feature enables reflected light detection without adjustments in locations with water level fluctuations as long as the distance between the detector and the water surface is between 30 cm and 4 m. The LMD-3000 can support water level fluctuations up to 6 m on still water surfaces. It uses a combination of an optical filter, electronic filter, and software to prevent malfunction from being caused by disturbance light such as sunlight or fluorescent light. False alarms caused by floating materials with high reflectance such as aluminum foil and plastic film can be avoided by increasing the continuous detection time*. 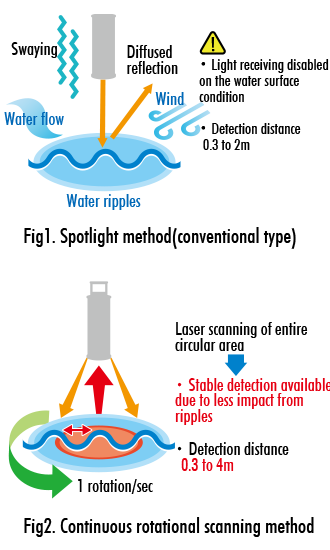 *What is continuous detection time?

Continuous detection time is time during which the condition of the detection level of generating alarm has continued, being added to the detection criteria. The time is set according to the status of the flow rate and oil film in the detection location. It may be set between 1 and 999 sec. For example, if the time is set to 10 sec., it is judged that there is no oil when the oil flow under the detector is interrupted within 10 sec. On the contrary, when the oil continuously flows for 10 sec. or longer, it is judged that there is oil. In this way, setting an area (time) for Oil detector can avoid sensitive detection of small amounts of oil.

Whether to generate an alarm can be determined according to the ratio (%) of an oil film on the monitored water surface (2 m or lower still water surface) Oil leak alarms are prevented from being generated by factors other than oil leak accidents (such as oil films staying on water, iron bacteria, insects, or fish).

Due to the non-contact system, the daily maintenance required is only wiping debris off the glass window at the bottom of the detector. In addition, laser-related design is drastically improved to extend the maintenance cycle to 4 years (twice the conventional one). Please Contact Us for laser-related consumables.

3.5-inch large-screen color LCD (with a touch panel) has been employed to exceedingly improve visibility and operability.
Color graphic display enables the monitored state to be identified at a glance

Available in Class 1 hazardous locations where an explosive atmosphere exists continuously or for a long period of time. The pressure-resistant and explosion-proof model of already commercially available LMD-3000 with its performance as is. 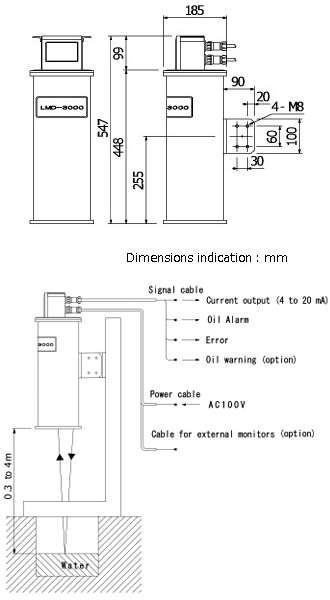